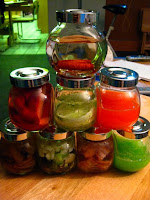 After reading about the awesomeness that is Bacon Vodka I knew I had to try it... and since it's me, why start small? I found these nifty jars at Ikea and thought I'd do a variety of test batches before settling into my new signature Infused Vodkas... 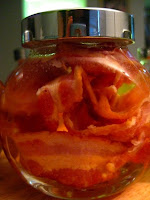 BACON VODKA
3 strips of crispy fried bacon greatness stuffed in a bottle with Sky, will let this sit for 3 weeks before freezing and straining. 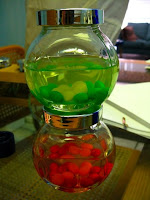 SKITTLES VODKA
I feel like these are always a staple when doing easy college-esq infusions. Within a hour they'd already lost all their pigment into the infusion and formed a nice creamy color. They should be ready within a day. 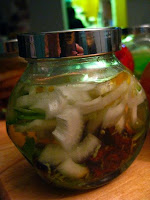 SALSA VODKA
This is a test trial... We were trying to think up a *new* infusion, one that's never been done before. There are tomato vodkas. Onion vodkas. Lime vodkas. Why not throw in a little garlic and take it for a spin? Test #2 will probably use tequila as that seems better suited to the flavors. 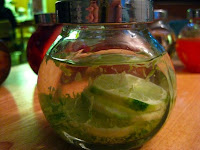 SALTED LIME VODKA
I have no clue how the salt will affect the vodka, but I used a delicate pink sea salt combined with the citrus-y lime to hopefully yield a vodka with a slightly different taste. Again another one that should probably be re-done with tequila on the next go-around. 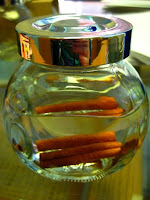 CINNAMON VODKA
A classic, I just think this will taste super yummy and sort of want to try it out to see how it could be combined with other flavors. 1-2 weeks depending on color/taste. 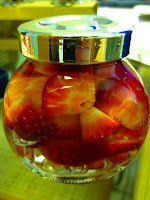 STRAWBERRY VODKA
An oldie but goodie, just had to try this one to see the strawberries turn white as their pigment is sucked out. 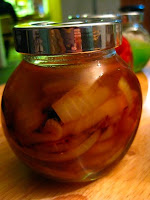 CARAMELIZED ONION RUM
Saw this mentioned in passing on a blog somewhere... thought it sounded interesting and since I love me some good caramelized onions! 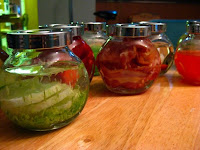 Anyone want to volunteer to taste test these *interesting* creations?