I gave it a half-hearted try, but alas I find myself constantly sucked back in.  This time I blame Nicholas Sparks, who with one little line... "bacon wrapped brie with a raspberry sauce" did me in.  Frantic, I searched the web high & low for a decent recipe, but alas, none were to be found.  SO.  Here's how I envision this going in my head.  Hopefully the test kitchen agrees and it's just as magical as I picture it tasting.

1 Round of Brie (sliced in half)
1 Jar of Raspberry Jam
6 Strips of Bacon, fried to a crisp
1 Pastry Crust Dough
1 Egg

On the pastry crust, spread out a layer of Jam in the center, approximately equal to the size of the Brie round.  Sprinkle some crumbled bacon on top.  Lay the first half of the Brie, top down.  Fill the center with more jam & bacon.  Put on the second half.  Smother the sides in jam.  Wrap up the confection & flip over, so the top is nice & flat.  Coat with an Egg White wash & sprinkle the remaining bacon bits on top for added garnish.  Bake & enjoy.

So what do you guys think? 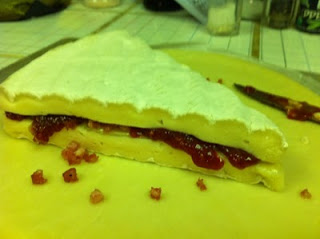 8.5.10 - Update.  It was a success!!  An absolute must try again.  Here's my concoction before I wrapped it up, but sadly didn't wrap it tight enough, so the cheese spilled out in my oven.  Still tasted delicious, but not really photo friendly.  Perfect for a party, with just the extra bit of added saltiness to keep everything interesting.

I used panchetta instead of bacon.  It's already pre-chopped and everything, so for the sake of time, it worked out well.  Also used TJ's raspberry preserve, which is still one of my favorites.