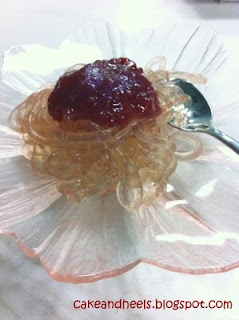 Now that my collection of crazy chemicals have arrived, and I have my trusty (or not so trusty) scale, injector, squeeze bottles, slotted spoons & thermometer... the crazy experiments can begin!

Amending a Kir Royale Caviar recipe to use things I had lying around my house... I set out to make vodka caviar.

However, I haven't quite figured out my scale yet, so what I thought was 1 gram of Alginate was probably closer to 4 or 5.  I ended up with a super thick gooey mess.  Very slowly I added in probably another 250ml of cranberry juice & vodka mixed together (it was handy that I was drinking as well as experimenting.)  The result was still a little too thick for caviar, but I thought I'd give it a shot anyway.

I poured the mixture into a squeeze bottle & then started dropping bits into the Calcium Chloride bath, but because of the density, the caviar looked more like sperm than perfect balls.  Frustrated I gave the bottle a squeeze, and out came a long noodle of Vodka.

I fished it out & rinsed it off.  Firm enough & with the texture of a glass noodle, this seemed promising.   I ended up making myself a whole bowl of Vodka noodles.  For the presentation, I needed something sweet, but chunky enough to seem like a sauce.  Thank god for Raspberry compote!  It did the trick. And with a little flick of magic dust, my nouveau noodle dish was set! 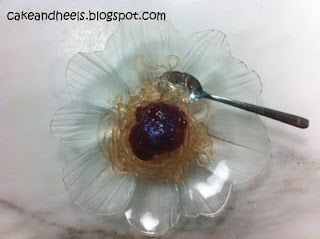 Also being filled with Vodka, I thought I had to for sure put it in a drink as well.  But this is where the caviar version would have been much better suited.  It was a little weird to suck noodles out of a martini glass.  Eh, that's why they call it experimenting! 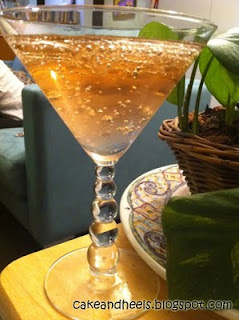