After listening to my friend Keith rave and rave about this place, it secured a valuable spot in the limited food slots I had on this trip.  Mr. David Chang & his collection of restaurants didn't really make much sense to me... "Have you eaten at Momofuku?" But there isn't an actual single place called that.  It's his brand.  Much like Mr. Colicchio and his Craft||Craft Bar||WichCraft selections, based on advice gathered from my foodie friends near & far, Ssam Bar seemed the way to go to pop my Momofuku cherry. (I mean, that is after the amazingness that was The Chang Dog at PDT)

We started with some steamed pork buns, filled with delicious pork belly, hoisin, cucumbers & scallions.  After a generous dollop of siraccha I was ready for a taste.  YUM.  My friend has done the bo saam many a time ($200 for a whole pork butt) and as he explains it, it's much like eating the meat from these buns x 1,000.  Death by pork fat.  I mean, if there's a way to go, that's not the worst one.  We also tried their seasonal bun, a BLT, which was still good, but not amazing. 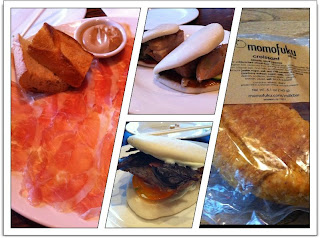 There was a category on the menu that didn't make much sense... country hams?  On further inquiry, our lovely waitress (and coincidentally a girl I'd known since I was 5, but probably haven't seen since I was 6) explained that it was more akin to sliced prosciutto, served with a "gravy" and bread.  Smoked, thinly sliced ham, yum.  Bread with that perfect crunch, check.  Brownish sauce?  Taste? OMFG WHAT IS THIS STUFF?  Coffee Grinds & Mayo.  I could seriously eat this on everything.  Everything.  If only for this sauce, I would totally order this dish again & again.

Next up, this gorgeous green sauced dish appears.  Fried duck necks with pickled corn, garlic chives and baby carrots.  Duck necks are kind of a weird thing to eat in reality, and while tasty, sucking the insides out of a neck feels a little too Twilightish for me.  But with the sauce & the, whatever those purple things were, it was a great balance.  And then there was the pickled corn.  It was like nothing else I'd ever tried, salty, vinegary, spicy and sweet all at once. 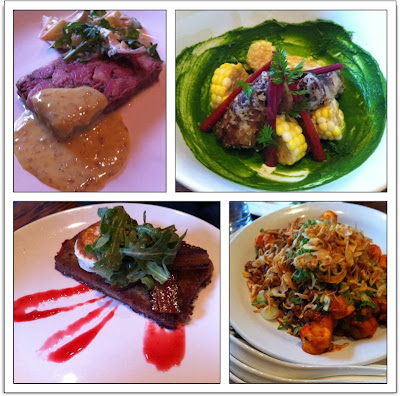 Scrapple - Not quite as well done as the batch Isaac's father fried up, the texture still confuses me, but the flavor is very comforting.  Also, I don't know who Benton is, but he does make some dandy good bacon.  I think it was even candied to add a nice sweet to salty component.  Much like the scrapple + pumpkin butter combo I played with earlier.

Corned Beef Terrine - Leave it.  One failure out of many successes.  In my mind this was coming out as a steaming hot corned beef with a sizzling raw egg on top ready to be mixed into the fold, but it came out cold, soggy and flavorless.

Spicy Pork Sausage & Rice Cakes - By far the best thing we had out of the whole meal.  It came with a warning, be wary of the red peppers.  Because they are HOT.  Indeed they were, a very spicy and heartwarming dish that had flavors which encapsulated all of the great things about each of Mr. Chang's items I'd experienced throughout the meal.  It was a great way to tie everything together.

Way too full for dessert, we headed over to Milk Bar to grab some coffees, but were of course waylaid by yet another interesting flavor combination.  Kimchi & Blue Cheese Croissants?  We tucked one in our bag for later, after we'd come out of food coma & went on our merry way.

Success!  But next time, I totally want to do the beef seven ways @ Ma Peche.