My introduction to Pon Haus, or as the commoners like to refer to it: Scrapple. 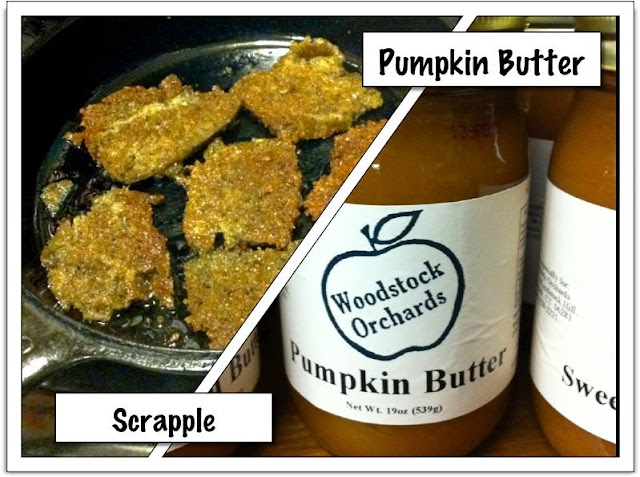 Scrapple, also known by the Pennsylvania Dutch name pon haus, is traditionally a mush of pork scraps and trimmings combined with cornmeal and flour, often buckwheat flour, and spices. The mush is formed into a semi-solid congealed loaf, and slices of the scrapple are then panfried before serving.  ~ Wikipedia

Now my boyfriend has been going on and on, ever since I met him about the joys of scrapple, but thanks to my non-southern roots, the idea seemed a little less than thrilling.  I guess that's how 90% of the states view Spam which due to my hawaii heritage & my mom's insatiable lust for the stuff while preggers with me, I adore.

So when visiting his home, we figured it was about high time for me to try some of the fried staple of the Zucca household.  Also I'm quite taken with the name pon haus, and will only refer to it by it's Pennsylvania Dutch origins from here on out.  Much like Spam, it comes in a congealed loaf which must be sliced & fried.  While on the griddle it gave off a sensual & meaty aroma, akin to a hot plate full of bacon & biscuits. My taste buds started watering & when it finally came off, I was ready to chow down.  Crispy with a mealy texture, it reminded me of a meat cracker.  Pretty good, but I think it will take a little getting used to...

That said, once I have something salty and meaty in my hands, my taste buds scream mix some sweet into that savory stat!  And since we'd stopped off at the orchard earlier that day & picked up some fresh pumpkin butter (mmm good) a dollop on top created a symphony of flavors in my mouth.  I think in the end, that combination is what won me over the most.  Imagining the possibilities of Pon Haus cakes covered in pumpkin-y goodness.
Newer Post Older Post Home