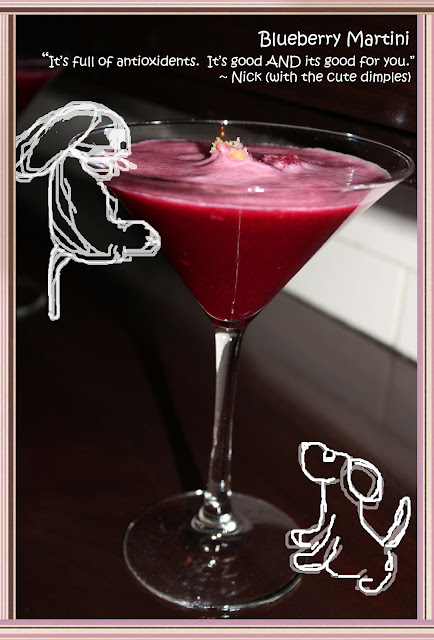 I'm not even sure if I can truly sum up the genius that was my experience at Chef Redzikowski's Bond Street... and I'm not just saying that because he comped our meal after our Test Kitchen Shenanigans!

Which he explained yet again was an issue of mis-communication with the hosting staff at the Test Kitchen, but I can't complain at all considering the outcome.  A chance to pick the brain of an extraordinary chef, yes please!

We started off the evening with a Blueberry Martini, served on a platter with a scattering of blue stones (which I totally failed at capturing a picture of before it was quickly whisked away.)  I'm not exactly sure what was in it, but the frothy sweetness was very reminiscent of a spiked childhood juice box that had been frozen for the summer.  Plus, the sushi chef Nick chimed in that "It's full of antioxidants" which was very helpful considering I'd barely made it to the restaurant after getting over being sick all day. For the first course we were invited to try a baby leek terrine with lobster, caviar & vinaigrette.  Story Break: Almost 6 years ago... gasp... Punky & I were enjoying a lovely lunch at Union Square Cafe, when the question of leeks and legumes came up (Punky having never eaten a leek before) & Chef Michael Romano answered our questions by running out to the farmers market & gathering samples!  It was the definition of farm to table & perhaps one of the first times I really appreciated the care that chefs take in creating their food.

I'm a sucker for anything covered in caviar, so this was all good for me.  As for the descriptions, in doing a little research on the name of the dish, I found that Chef Marco Pierre White was the host of the Americanized version of The Chopping Block (that's supposed to say Block, not Blog) which was canceled after I believe only 3 episodes! 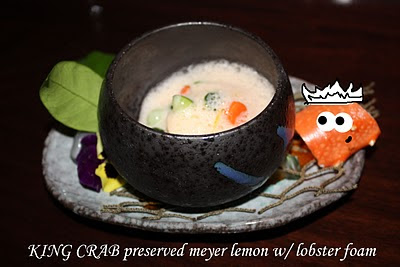 In reading reviews the raved reviews of Bond Street, the King Crab always comes up as a fan favorite, & it did not disappoint. Huge chunks of sweet crab, carrots & zucchini layered in a lobster & what had to be 12,000 calories of butter foam, this dish was superbly rich & decadent.

Plus, Punky, just so you know, Pansies are edible.  I'm not crazy.  Well not THAT crazy. 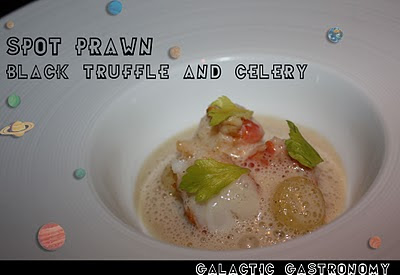 While caviar is on the plus list for me, truffle is on the x-nay list for Punky.   That said, she had no problem with this dish.  Unfortunately it felt a little too similar to the previous dish for me to really tell the difference.  Aside from the essence of truffle... obvi.

The dishes on the other hand had a lovely texture, and even better, were hot!  (Me being a little sickling who had to ask for hot water in the middle of the menu, absolutely enjoyed and welcomed warming myself up on this dish. 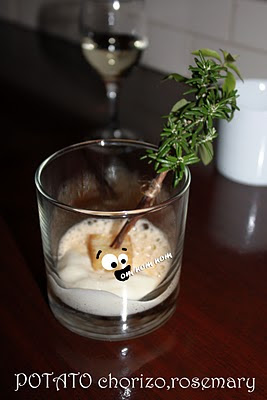 God.  I'm just looking at this & thinking about how many more dishes I have to get through.  I apologize that this post is going to be ridiculously long & if you just want to look at pictures from this point out, I wouldn't argue.

Next up was a potato skewered on a sprig of rosemary in a chorizo and rosemary foam.  Something else that should be mentioned is that Chef Redzikowski filled us in on his extensive wine background from the CIA.  When he was 18, he won a scholarship to travel through France, but couldn't go because he was too young!  His well developed palate added to the enjoyment of the pairings as we dove through the courses.

I wish I'd taken better notes on all of the wines presented, but the combination of alcohol & sudafed certainly took its toll on my handwriting skills so I decided to rather just sit back and enjoy the evening as intended. 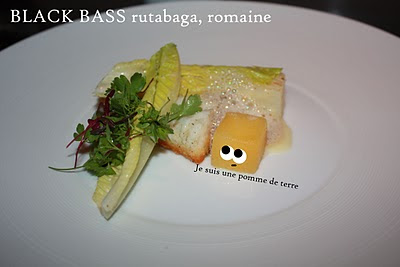 When Punky asked Chef Redzikowski about his Big Eye Tuna Tart that had been a staple in Bond Street reviews, he explained that the original Bond Street in NY had stolen his idea and tried to make it their own.  Not to be outdone, Redzikowski just as quickly took it off his menu.

Potato cubes being a theme of the tasting menu, that lil guy made his way onto this dish as well.  The crispy skin of the black bass was probably my favorite part.  Cooked perfectly it was crunchy and sweet all at the same time. The Foie Gras liquid ravioli came out in a gorgeous presentation, and created almost the opposite in savory to Mr. Wiley Dufresne's passion fruit filled foie gras @ wd~50.

The salty burst of flavor was just the right in-between to bridge the sweet black bass with the savory meat & potatoes.

Plus this dish was yet again covered in edible pansies!

When Chef Redzikowski talked about his kitchen, he explained that it was a 24/7 operation, built to service every need & whim of the beverly hills hotel clientele (which after working for certain people, I can absolutely relate to)... so when I asked him when he slept, he calmly replied "Well.  I take Sunday off."

And I thought my hours were ridiculous!

Meat and Potatoes, the staple of Ireland.  But in Redzikowski's playful hands it's transformed into a piece of art. 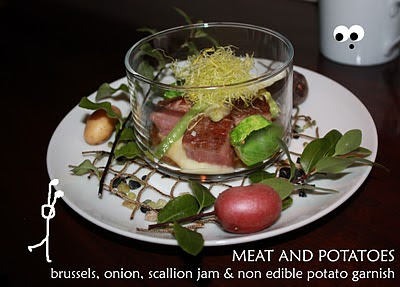 Underneath the wagyu, brussels sprouts, pearl onions & some crazy garnish that I didn't write down, there was a delicious scallion jam.  Onion jams are slowly making their dent on the savory scene, and I for one am grateful.  I could eat caramelized onions by the spoonful (and I think one time even did when I was in college) and this scallion jam was no exception.

I did however learn the hard way that those baby potatoes on the outside platter were in fact just a garnish.  Not meant for regular consumption until cooked. 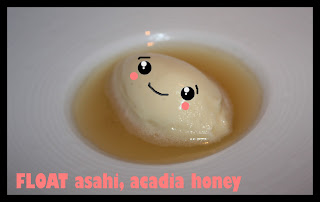 The Asahi Beer Float was Punky's favorite by far.  A whole palate cleanser made entirely from beer?  Yep!  Underneath the beer ice cream & the fresh beer poured on top is a beer jelly made from asahi, acadia honey & xantham gum, which thankfully I have in mass supply!  So eventually one day, once Punky gets her liquid nitrogen supply from work, we can attempt to recreate this delightful little dish.

Scratch that, us + liquid nitrogen.  I can't see that turning out well at all.

And we're finally on to the desserts.  This will be short & sweet because by this point in the evening I'd stopped taking notes completely, so all I have to go on is that the Mochi reminded me of childhood, while the Half Baked deliciousness was much more reminiscent of college. 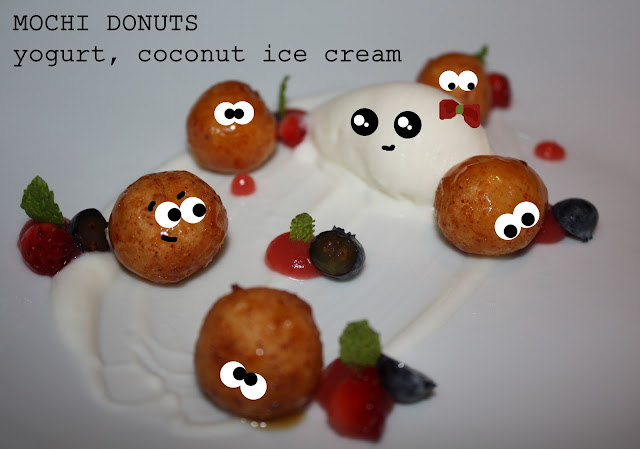 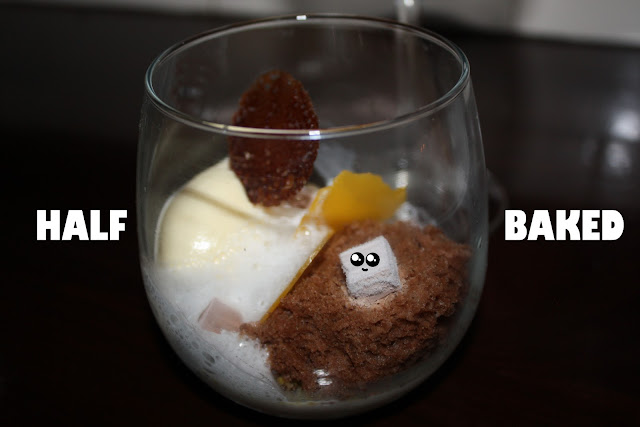 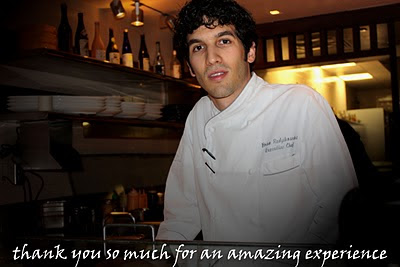 So again... thank you Brian for an incredible evening & I can't WAIT for you to open your new restaurant Claustro!