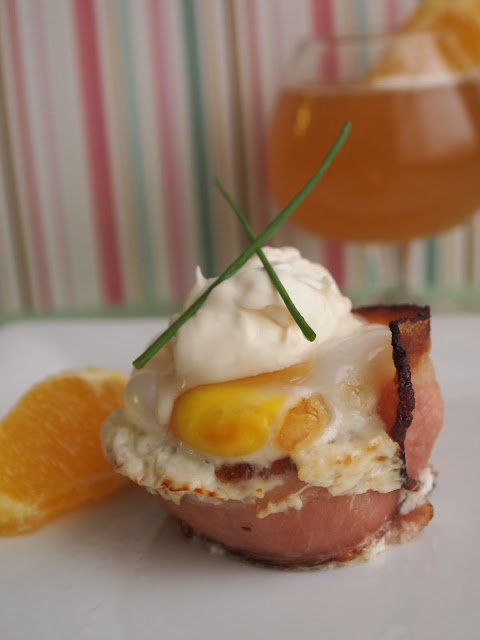 This week I decided to go with a Superbowl Sunday decadent treat... The Kegs 'n Eggs "Cupcake."  I'll use the term cupcake lightly here since that term seemed to throw my boyfriend's mental image of this breakfast snack slightly off...

Thanks to my best friend M, I'd been introduced to the concept of a bacon cupcake wrapper... Hot diggidy, did this idea need a test run on my blog!  And to add to the bacon & egg allure, I tried to think of a way to creatively introduce a tinge of beer flavor into the mix. 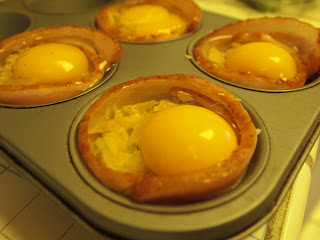 To drain a little excess fat out of the bacon, I laid the strips on paper towels and microwaved for about a minute and a half.  Then, using 6 strips I lined the inside of the cupcake tins.  With the remaining bacon, I sliced them into squares to cover the bottom of the cupcake tin.

Into each cup I added a small handful of Gruyere, a sprinkle of chives and a cracked egg. Make sure to pack everything down so your egg does not overflow out of the cup.

Bake at 350 degrees for about 20 minutes or until the egg looks thoroughly cooked. 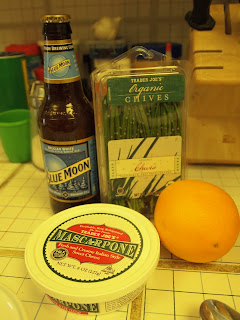 In a bowl I combined the Mascarpone Cheese with the beer and slowly mixed until it was all incorporated.  Do this slowly as the beer will start to fizz if you mix it too quickly.

Then, using a cheese grater (or mandolin if you have one) zest the rind off of your orange and mix into your Frosting.  This will add a nice slightly bitter orange flavor and texture to your cheese.  A little sweet, a little sour, and a great creamy topping to the saltiness of the bacon, I thought it all worked out quite well!

I garnished each dollop of frosting with a pair of crossed chives.
Newer Post Older Post Home