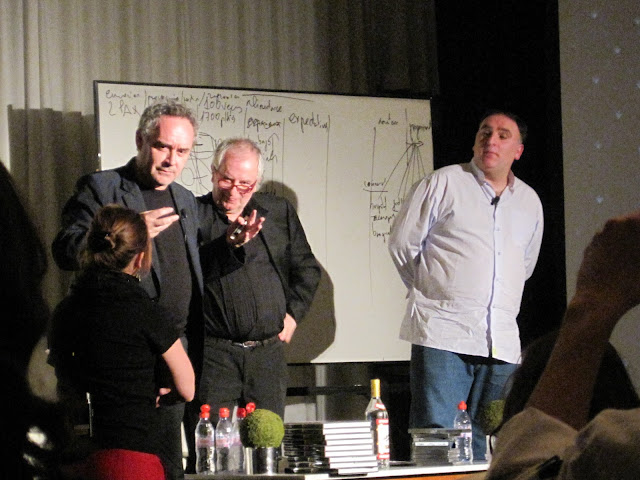 "To be avant garde, you have to think like a child, or you have to leave it to evolution.” – Juan Mari Arzak

Last evening, José Andrés hosted a talk with his two dear colleagues Ferran Adria & Juan Mari Arzak at the SLS Hotel in Los Angeles. The sold out event attracted a diverse audience of foodie aficionados, all with a similar mindset – to absorb as much information from these culinary masterminds as our spongy brains will allow. What we received was a moral code, if you will, that by embracing unity instead of fueling animosity, much like Adria & Arzak’s friendship, we have the ability to empower both ourselves and our world around us.

Andres began the event by first introducing Ferran Adria, touted as one of the most innovative chefs in the last 20 years. He showed a short documentary of a couple who’d eaten at elBulli more than 100 times, and who’d tried more than 2,700 different plates. Not that I’m jealous or anything, but it did inspire a dose of envy and awe that quickly filtered through the room, and nicely set up his introduction into breaking down the reasons for eating. Experience, he explained, was a mere subset of the variety of reasons to consume food, yet it’s the same experience which motivates modern Spanish cuisine.

“I don’t do my mother’s cooking. Because I am a professional and she isn’t. Even if she is a better cook.” – Ferran Adria

“We’ve developed a cuisine for non-cowards.” Andres quickly quipped that he didn’t always support Adria’s words, to the amusement of the crowd. But he’s right. In their world of avant garde cooking, where inspiration comes from an imaginative & whimsical mindset, menus come in pre-arranged building block of flavor & texture, and ingredients are often fairly new discoveries, they leave little room for the picky or non-adventurous eaters. Which I applaud. The impasse to creativity always starts with stubbornness.

Andres then introduced Arzak, explaining that he was the father of “New Basque Cooking” or modern Spanish cuisine as we know it. He applauded Arzak for having the fore-sight and understanding of the world at large to create a lasting collaboration and friendship with Adria as a young up & coming chef.

“He endorsed everything where there was supposed to be collision.” - Andres

In a very conversational tone, Andres then opened up the room for questions, citing that this was designed to be more of a discussion on food versus a strict by the books lecture. They joked that they would keep their answers to less than 5 minutes, which wound up being far from the truth. Once they got the ball rolling, watching the trio work off one another felt very akin to watching a new idea be born. They joked, they mocked, they made insightful observations, and above all, they respected and applauded each other’s opinions, even if they weren’t copacetic with their own.

When asked what they still hoped to accomplish as chefs, Adria, in a move which titillated the audience, he posed a challenge, to anyone in the room who could name at least 20 different dishes from Hungary, he’d offer an extremely coveted seat to his re-opening of elBulli. The most depressed crickets in the world descended on this room full of chefs, experts, teachers & foodies when not one of us could meet his dare. He explained that there was still so much for them to learn in an always growing global environment. He also went on to say that while the experience of eating is important, elevating our daily consumption held equal weight. He mentioned a book that he’s releasing “What do we eat at elBulli from 6:30 to 7, 30 recipes under $3.” It’s his fast food for home title.

Andres went on to tout his ideals on being much more logical with food and how we feed ourselves. The growing trends toward local & seasonal bothered him, not so much in their added value to the flavor of food, but of the restrictive & expensive nature they create by adding those terms.

“Let’s only do local. Let’s only do seasonal. You can’t be telling me this when your shoes come from china, your clothes from Korea and your underwear from who knows!” – Andres

He was much more concerned with creating an ideology which states that we should obviously use local and sustainable products when it makes sense, but that we can’t let that limit our scope of food. Everything is an equal playground to the masterful chef, and the moment people start closing their mind to ideas, is the moment they stop being creative. He makes a strong point as people have challenged his revolutionary techniques in avant garde cooking, citing his addition of “chemicals” to properties without even taking the time to understand the process they’re going through. It’s a backlash toward the unknown, but in reality they’re cowards.

“Sometimes the almonds talk to me and say, ‘Jose, I would like to be invigorated in a different way.” - Andres

It’s not that Andres is adding an element of un-natural to his cooking, he’s just viewing the limits of cooking as an infinite horizon. If you have a set of building blocks, knock them down, and then re-build them in a new configuration, you’re not changing the number of blocks; you’re just changing how they’re viewed. That’s what Andres has done. He’s found ways to naturally deconstruct and reconstruct food to create an unfamiliar out of the familiar.

“The person who probably invented the puff pastry got burned in the fire. ‘Oh you made it so big, you’re a witch!’” – Andres

When dealing with the nature of food versus art, Andres showed a presentation of his time with Dale Chihuly, learning how to mimic his gardens in food. Andres enthusiastically told the room that he even chipped a tooth while Chihuly was teaching him how to blow glass.


Then perhaps one of the most important questions of the evening was asked… if the lines between food and art are becoming grey, what is their stance on culinary plagiarism?

Adria jumped right back up to his whiteboard to draw a diagram illustrating the fact that he believed there were only about 10 real chefs in the world who were actually creating, and in those realms plagiarism should not be tolerated, but for the rest of the chefs, they should take those tools, use them as building blocks for their own creations, and just remember to give credit when credit is due.

“When we talk about Michelin, we talk about stars. When we talk about Zagat, we talk about points. When we talk about magazines, we talk about the 50 best restaurants, but we don’t have a list for the 50 most creative chefs. The internet is changing the rules of the game. Like we saw in wiki leaks […] From now, to 5 to 10 years, we will see a dress with a label, that is the same dress from 20 years ago. From here on out you shouldn’t have any demands. If a young restaurant takes an idea from Andres or myself that’s fine. You just keep going up and up. There are no auditors. No one knows how many dishes elBulli has made. If we’re talking about creativity, there’s no way to control it.” – Adria

He wasn’t building a case for creating a way to control creativity, and in fact thinks that is probably the worst intervention to inventing cuisine, however he was stating his point, one that Hollywood constantly suffers from, there are very few original ideas left in the world. The only real forefront of discovery is in science, a field where invention can actually be documented.

Andres then went on to defend Adria, stating that he believes 95% of the dishes or techniques that were meaningful in the world came from elBulli, and that Adria is perhaps one of the most generous men in history.

They ended the evening with a discussion on the future of cooking.

Arzak then showed the final presentation of the evening. He said that what you need to do is constantly test the limits. His latest concept was in light. He wanted to delve into and discover how light effects both the way we cook and eat. Considering “Dining in the Dark” is one of the new frontiers of culinary experiences, he is right on the money.


After their talk, the audience filtered out into the reception where several of Andres’ Bazaar masterpieces were being created for our rumbley tummies. It was a thought provoking and enlightening look into not only the future of food and cooking, but how we can exist and operate on a global scale, constantly learning from each other instead of closing ourselves off to innovation.

“Everything in life is moved by passion.” - Adria

** littered throughout the article are pictures taken by Nicole Iizuka from my dinner at Bazaar @ SLS Hotel.
Newer Post Older Post Home