It was a cold and rainy Sunday, one in which we assumed the crowds would be lean at Doughboy's on 3rd.  But alas, the rain couldn't keep away the masses, and as we settled into a glittery little nook (remnants of a new years eve glitter explosion gone horribly awry) with a 30 minute wait, we surveyed our options.  The French cafe next door looked equally as filled, and being a wimpy southern californian, the thought of walking the 3 blocks to joan's on third seemed out of the question.  But the boys I was with, both toughened by 4 long years of Ithica snow, dragged me like a pathetic chihuahua down the street to investigate.

And boy am I thankful, because on the way we passed a new little sandwich shop that's been getting some rave reviews...

After geeking out for a second on twitter, ordering up some much needed warming to the soul Intelligentsia coffee & taking panorama pictures with my iPhone, we finally checked out the menu.  Um. YUM.  With options like grilled pb&j and brisket & mac n' cheese sandwiches how was I ever going to decide?

Why, ask the waiter of course!

And considering I had my better half in tow, in which eating off his plate is a requirement of dating me, we could try both the breakfast & lunch.  He decided to go with the hash. corned beef, sweet potato, poached eggs, toast. Simple enough.  Extremely well seasoned, he likened the dish to a "culinary masterpiece made by a cowboy." 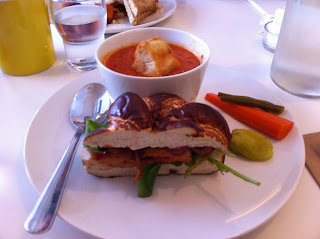 As for me, drenched & cold, I couldn't pass up roasted tomato soup oven dried tomatoes, fresh basil.  I went for the soup & half a sandwich combo, since sandwiches are half their namesake.  The waiter told me his favorite was the pulled chicken arugula, pickled onions, garlic aioli, chevre, pretzel roll.  Sold!  The soup had a nice fresh flavor & chunks of sweet tomato and the sandwich was light and filling.  I certainly finished feeling satisfied and content.

Wait.  I lied.  How could I finish this meal without a pie?

Being an avid lover of all things cupcakery, I do have to say, I'm slightly torn on the pie vs cake debate.  While cupcakes offer the supremely wide variety of decorating possibilities, pies reign supreme in their simplicity.  Would I take a bacon jam cupcake anytime... yes!  But would I choose a simple chocolate cupcake over a chocolate chip pie?  Absolutely not.  It's the combination of simple & well made flavors, with a crumbly crust that make these pies an absolute delight! 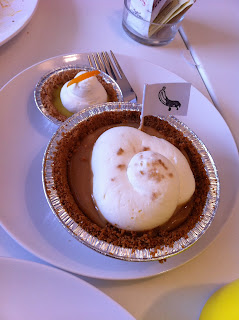 Also, with flavors like Banoffee (could it be banana & coffee OR banana & toffee?), French Silk & Missouri Mud a couple of "cutie pies" were certainly in the cards.

In case you were curious, Banoffee was banana & toffee (WITH A HEAVY HAND OF CARAMEL.)  Gods gift to aspiring diabetics.  We also had to go with an orange creamsicle, with what shockingly was not a candied orange rind on top.  Niki's theory of let's try everything on the plate was not pleasantly surprised.

All in all, this is a great new brunch spot to add into my weekend rotation.  Yay for simplethings!