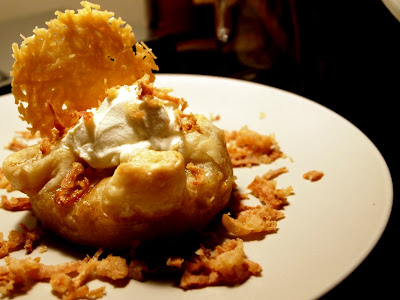 After having the French Onion Soup Dumplings at Stanton Social, I knew this was something that could easily be converted into a cupcake formula.  It's like the best of both worlds!  Soup Dumplings & Cupcakes!  Plus, this couldn't be any easier to make.  So enjoy!  And watch out for all the calories (of which there were plenty) 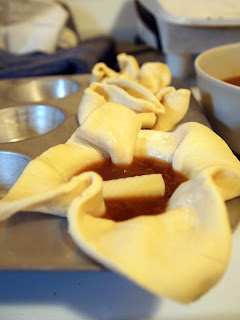 Pre-heat your oven to 400 degrees.  In your cupcake tin, butter all 12 molds.  Open your can of French Onion Soup and set aside.

Lay out the Puff Pastry and cut each sheet into fourths.  Using one square, press it into a cupcake mold.  Once it's nicely fitted inside (there will be extra hanging over the edges that you'll fold back to cover the top) place in one cube of Gruyere Cheese, and then spoon in your French Onion Soup until it's almost full.  Like a little gift, fold over all four of your corners until you have a nice little package in your cupcake tin.

Repeat with 5 more tins until you have 6 cupcakes total.  In a bowl, whisk your egg, and then using a brush, brush some of your egg wash over the top of each of the cupcakes.  Put your cupcake tin in the oven for about 10-12 minutes or until the top just starts getting some color.

Then take the tray out, and in the remaining six tins, mound a handful of Parmesan (these will bake nicely into your Parmesan Crisp garnishes) into each section.  Place your tray back in the oven for another 8-10 minutes. Using spoons, remove your baked French Onion Soup Cupcakes from the tin, and transfer to your serving dish.  Take a spoonful of Mascarpone and dollop it on top of the hot cupcake.  Stick a Parmesan Crisp in as a garnish, and then sprinkle some crunchy fried onions around the plate for an added texture!

I served these with my own concoction of the evening.  My lovely boyfriend has decided to become the master mixologist to my attempts at avant garde cooking.  So he bought some egg whites and we whipped up this take on a fizz... not sure what to call it quite yet! 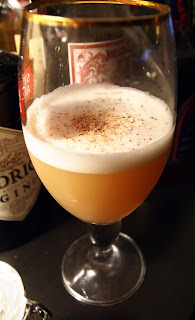 The Iizuka||Zucca Concoction
In a shaker, mix together Rum, Cointreau, Agave & Egg Whites.  Shake for about a minute before adding Ice.  Then Shake for another 2-3 minutes with ice before adding Club Soda.  Give it a few more shakes before straining into a chilled glass.  Shave some Nutmeg on top before serving!

I wasn't really thinking French Onion Soup Cupcakes when mixing this up, so no, in case you were wondering, they are not meant to be paired together.
Newer Post Older Post Home