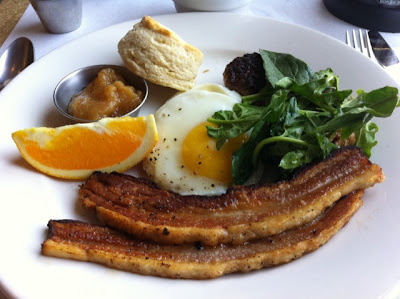 I could write sonnets on the heaven on earth deliciousness that exists at this little butchery and eatery just around the corner from my house, but I have to focus.  Focus on what is now one of my favorite breakfasts in the entire city.  It even beats the Great Bacon Cinnamon Roll Experiment.  And that's sayin something...

So what is this magnificent breakfast you may ask?  Well, it's simply the 2x2x2 from Salt's Cure.  2 eggs x 2 sausages x 2 ridiculous slices of bacon.  Perfect for the protein enthusiasts of West Hollywood, whose daily regimen of hours at the gym would fast turn this breakfast into lean muscle, however deadly to the likes of me, whose after brunch schedule consists of a nap.  Thankfully to assuage my guilt, there was a small salad, a biscuit and a delicious apple spread on the side. 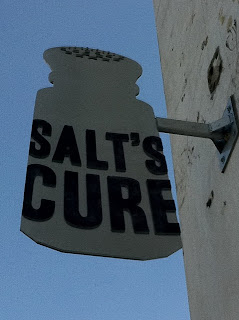 Chef-owners Chris Phelps and Zak Walters, having come from the likes of The Hungry Cat and Cube, certainly know how to make a bacon enthusiast happy.  Their thick juicy slices of perfectly cooked Bacon were just at that melt in your mouth consistency, and surprisingly worked really well in combination with the meat-y goodness of the rustic sausage patties.  I give it an A+.

The only thing that is a little daunting is the size of the restaurant... with only a few tables and seats, you could easily be waiting a few (or several) minutes on a warm & sunny weekend.  At least it's on a good people watching corner!