And now for another installment of FOODIES || Adventures with Live Seafood!

If you didn't think penis shaped pigs tails could be topped... well then you were wrong. The next challenge for Michael Levinson & Gloria Fan's FOODIES group was a trip to K-Town for a little sushi, Oldboy style.

Rolling up to the restaurant Chung Hae Jin in a strip mall right next to our beloved Boiling Crab, it's hard place to find as the only indication that you're in the right spot is a sign proclaiming "Live Seafood."  We'd been sent the menu ahead of time... 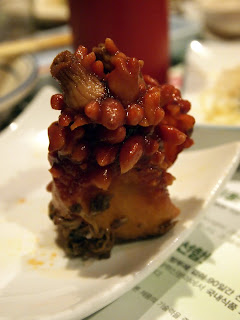 So of course I went to the google to get a glimpse into the meal ahead.  Live Octopus, or Sannakji is a fairly popular raw dish in Korean cuisine.  It consists of live nakji (small octopus) who's tentacles have been cut into small pieces and served immediately, usually lightly seasoned with sesame and sesame oil. The nakji pieces are usually still squirming on the plate. Sometimes it can also be served whole. Thank god that's not how we were eating it.

Because the suction cups on the arm pieces are still active when the dish is served, special care should be taken when eating sannakji. The active suction cups can cause swallowed pieces of arm to stick to the mouth or throat. This can also present a choking hazard for some people, particularly if they are intoxicated. One must thoroughly chew so that no piece is big enough to stick to one's throat. Some people like the feel of the pieces wriggling as swallowed, and so will not completely chew up the particles. Those who are new to eating sannakji should completely chew it up into tiny particles before swallowing. - Wikipedia

But let's back up a little bit.  I knew that the sannakji would be the highlight of the meal, but there were so many other crazy & strange delicacies that need to be discussed.  We started with a tasty bite of sashimi salad, a warm clam & ennoki soup and a bunch of soju & sparkling rice wine to get us nice and relaxed before the battle ahead.

Then to whet our raw taste-buds they served up some fairly traditional oysters spiked with a dot of hot sauce. Next came a huge plate piled with extremely fresh & flavorful sashimi, and a tray of this oishii flat fish whose name I didn't quite catch because I was too busy looking at the Sea Cucumbers.  (update, per my google searching... I think it was Halibut sashimi) 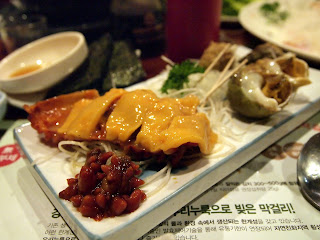 Once our bellies were nice and coated with a sampling of the ordinary, out came the parade of the extraordinary.  First, there was the plate of Sea Squirt & Top Shell Sea Snails... "described by journalist Nick Tosches as 'something that could exist only in a purely hallucinatory eco-system' and their peculiar taste, described as 'something like iodine' and 'rubber dipped in ammonia.' However, aficionados claim that the taste is well suited to serving with sake."  Ahh now it all makes sense.  To me it tasted more like a rubbery oyster, maybe they washed it slightly?  The sea snails were a little chewy but not unpleasant.  I think the gross thing was digging them out of the shell with a toothpick. 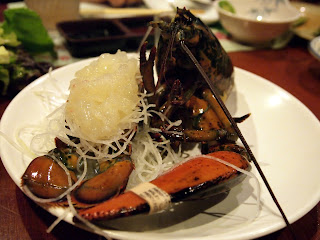 Then, out came the Lobster Sashimi.  Let me explain how this is prepared... they take a whole, live lobster, chop off his head & his claws, throw them on a bed of ice, and then while the tail is still moving, they scoop out the flesh, slice it into thin strips and then serve it back in the same shell.  It's a little (read a LOT) unnerving to eat the sashimi with mr. lobster's guilty eyes starring right at you.

But that was nothing compared to the octopus that literally FOUGHT its way down your throat.  The suction cups were still going strong as the plate of wiggling tentacles made its way to the table, and you could feel them grasping to the last strings of life as you chewed them up whole.  It's truly a ridiculous feeling, putting something still moving in your mouth.  Glad I can say I've done it & survived.  Not sure that eating Sannakji again is going to make an appearance in my food rotation anytime soon.

We ended with some tempura, grilled mackerel and a spicy soup made from the remnants of the zombie lobster to finish the meal.  All in all, if you're looking for an adventure, this is the place to go!