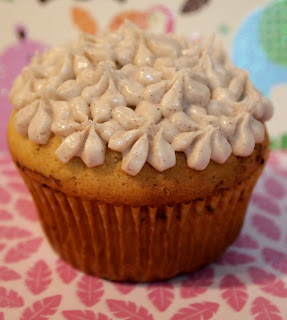 I realize these are a little "boring" considering my normal wheel-house of creations, but these are a favorite of my boyfriends, so I whipped up a little batch for his/my old boss' birthday!  They're pretty easy and SUPER tasty, a surefire favorite in my sea of strange.

Coffee & Cinnamon Cupcake
yield 1 dozen cupcakes || 20 minutes prep; 25 minutes cook
pre-heat oven to 350 degrees. in a bowl mix together all of the ingredients except the cinnamon and brown sugar.  in a separate tiny bowl, mix the cinnamon & brown sugar to make a nice crumble. line your cupcake tray and fill each cupcake 1/3 of the way full.  then spoon on a sprinkle of your cinnamon mixture.  fill your cupcake tin to 2/3 of the way full so there's a ribbon of cinnamon sugar in the middle of your cupcake. bake for 25 minutes or until golden brown. this recipe will yield 1 dozen cupcakes. 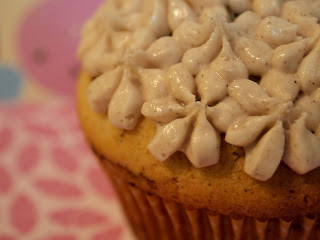 cinnamon frosting
in a bowl whip the softened butter until it's nice and smooth. slowly incorporate the powdered sugar, cinnamon & milk, alternating until you've reached your desired consistency. pipe on little flowers of frosting for a pretty finish.
Newer Post Older Post Home