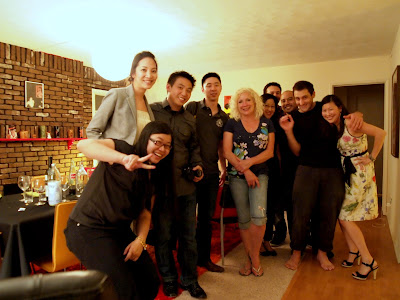 A week ago I attended my first underground dining experience.  I'll admit I was a little late on the jump with the whole "underground" scene, having heard tales of the starry kitchen's humble beginnings and only catching on to the wolvesden dinners once they'd reached the mainstream, but when I saw that two of my favorite food bloggers, kevinEats and Epicuryan had reviewed a new club I knew that this was bound to be the next big thing.  And so I emailed.  And tweeted.  And lo & behold while rocking out at the KT Tunstall concert I got my invite!

A 10 seat, 10 course meal, cooked entirely by the talented and self-taught *gasp* Isaiah.

I’m a hillbilly from Tennessee, taught myself to cook using food stamps and poverty as lever and impetus to find myself and my voice through cooking...

I have mucho friends across the world so I’m thinking let’s drop the egos, chefs! Come together with our stars and design this thing. The time is ripe for all manner of punk cuisine and dining experiences. When you come to one of my dinners, you’re coming to a concert. And if I’m collaborating with another chef, you’re watching a duo. This is a night to remember. You meet random, cool people.. you might even meet YOUR next collaborator… ;D

The dinner was absolutely fantastic (granted I'm not the most harsh of critics, I pretty much love everything that's tasty... maybe with the exception of live octopus) and there's a full recap of the dinner after the break! (CLICK ON THE READ MORE!!) 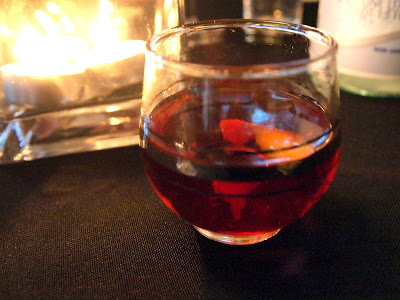 When we walked in, we were given the choice of a greyhound or an "aromatic" cocktail... having had many a greyhound before in my life, the choice was easy.  Host for the evening Nick also served as the master mixologist and what we'd later learn as the master fromager... the cocktail was very sweet to the scent and packed a nice strong punch when sipped.  I could have easily tucked in a few of these if there weren't several bottles of wine on the table with my number.
course #1: green papaya salad w/ escargot, brown butter & jalapeno 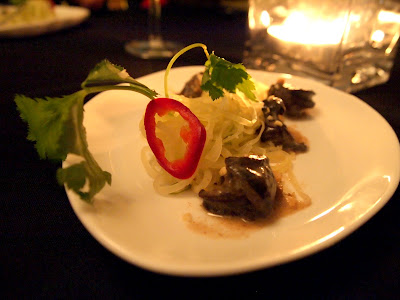 I'm going to apologize in advance if I've made a few errors... I tried my best with the note-taking, but it was hard to listen comprehensibly when there were plates of scrumptious food being set in front of us.  This was an interesting dish, the crunchy papaya soaked up the flavors of the jalapeno and nutty brown butter very well and honestly, who doesn't love escargot?  I mean, aside from the snail... 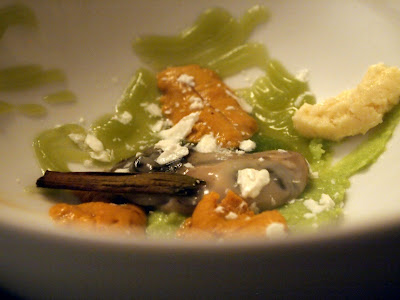 this course was prefaced by an apology explaining that it ended up being an amalgamation of several ideas that may or may not work together.  so i decided to enjoy this dish in parts :-).  i have to say, the pickled oyster was stunning, the clear winner.  the sour cream chocolate was also quite interesting, although i'm not entirely sure that it worked with the rest of the flavors. 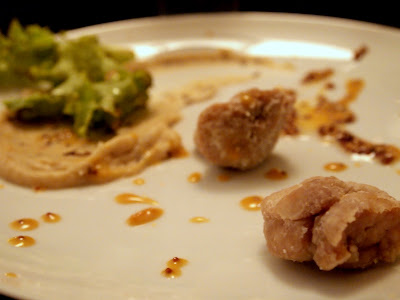 puree of rye bread?! OMG. yes, that deserved capitals.  that's how good it was.  i could eat this with everything.  what an interesting take on deconstruction a sandwich... the mustard was nice and spicy and the sweetbreads were rich and tender.  delicious, although i do wish there was a little more color since the lettuce sort of seemed like a last minute addition. 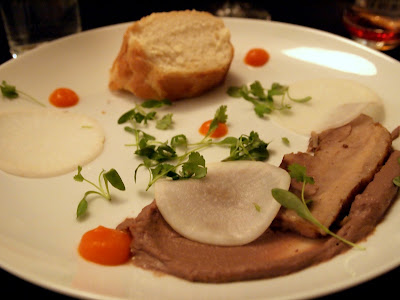 whoever invented the idea of the "micro greens" i give you a brava.  such a wonderfully delicate addition to any plate.  as for the food, pork belly, always a win. same with chicken liver. everything worked really well on this plate, but between the two deconstructed sandwiches, i do have to say i was slightly in favor of the first one... that rye puree, it sung to me. 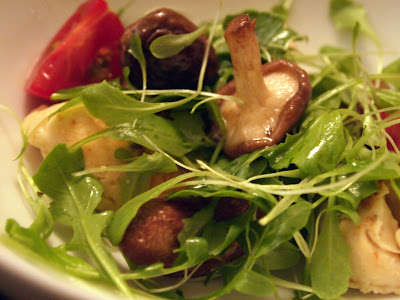 mmm, truffle.  at this point in the dinner i was starting to feel my waistline exploding and feared i wasn't going to make it through the rest of the meal, but thankfully this refreshing course made it's way to the table offering a nice break from the fairly carb heavy dishes prior.  i have to admit that i didn't eat much of the shrimp (being apparently a foodie lightweight) but i expended my calorie diet on the yummy potatoes.  plus, again with the micro veggies.  brava! 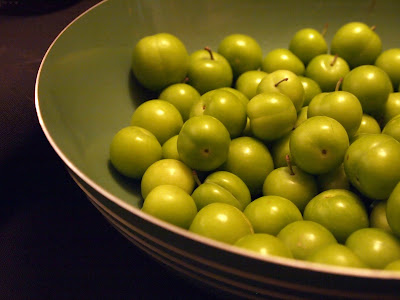 served as a palate cleanser for the in-between.  they just looked pretty in the matching bowl, so decided to snap a shot or two. 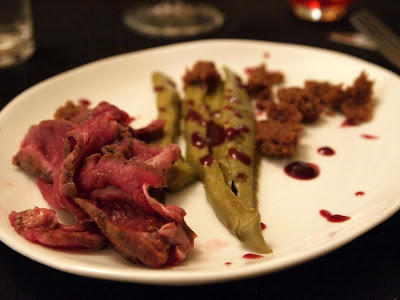 i've never had bison before... but i'll certainly have it again!  loved that it was just lightly seared, keeping the texture fresh & tender.  the cactus was a little slimy, but had a nice flavor and for the life of me, i still have no idea what teff is.  (even after the explanations at the table...) it was an interesting texture, but didn't have a lot of flavor. 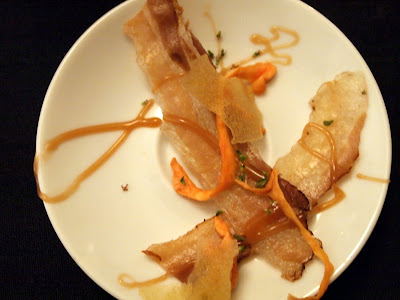 i've seen pictures & heard of the famed Alinea dish that inspired this course, but i've never, well i've never even been to chicago, so i have no way of comparing the dishes. that said, this dish i thoroughly enjoyed.  i'm a huge fan of anything that combines the savory & sweet, and this did it beautifully.  after licking my plate clean, i was tempted to ask for seconds!  the bacon, sliced to a 16th of an inch was from the new kid butcher on the block, Lindy & Grundy (who if you haven't had the chance to check out their wares, totally worthy of a pit stop, especially before the holiday weekend.) 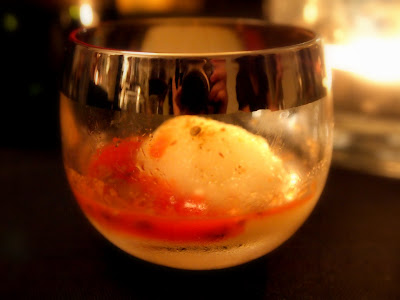 when i got home this was the first course out of my mouth when my boyfriend asked "so how was the dinner?"  what a stellar combination of unexpected flavors!  Isaiah, you can make this for me ANYTIME. 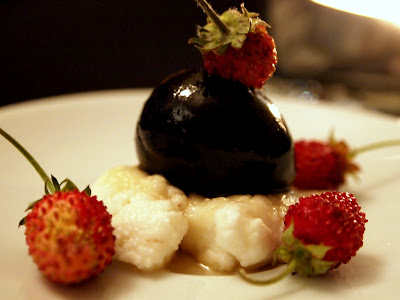 the goat cheese from master fromager Nick was the standout from this dish.  light, rich and flavorful this paired really nicely with the sweet strawberries.  the walnut felt like a little bit of overkill on the sweet side perhaps, but again, not complaining.  i could have eaten that goat cheese with anything and been happy. 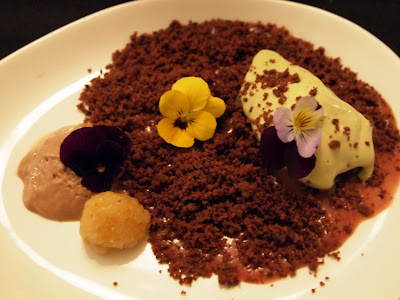 what a way to end the dinner, with a dish so gorgeous it was almost a pity to eat. i'd read about using maltodextrin in khymos' hydrocolloid recipe collection, but had never really seen it in action.  i think i'll be adding a bag to my next chemical run, as it created such a fun and playful texture which added a very unique quality to the dish. the ice cream was interesting, Isaiah explaining that the flavor profile was a combination of a very long lasting plant mixing with a short living plant, adding a poetic note to the end of the meal.

Truly a stunning presentation, especially considering he did this as a one man show!  (with two amazing friends who volunteered to bridge the guest to sous-chef gap)  I'd certainly go back, once my bank account allows it, or Isaiah, if you ever need a sous-chef, I'd love to audition for the gig!
Newer Post Older Post Home