Tonight my very talented friends Isaiah Frizzell and Nick Feller of the pHeast are hosting yet another underground dinner, which will surly be a gorgeous feast of their talented imagination.  If you want to sign up to find out about their future events email: thepheast@gmail.com.

Tomorrow, after a quick pit-stop at the 3rd Annual Korean BBQ Cook-Off, I'm headed downtown to check out Perch LA from the masterminds behind the Must Bar for my dear friends Elise Cantu & LoveontheGo's Birthdays. It should be quite a lovely night with Zoot Suit Review throwing out a nice little tune from Pershing Square.

What are you guys doing for the weekend?  Leave it in the comments below!

The 3rd Annual Korean BBQ Cook-Off
Noon - 6pm
Hosted by the Korean American Coalition, the event consists of our 3rd Annual Orion Choco Pie eating contest, a special performance by Dumbfoundead and the highly anticipated KBBQ Top Grill Master competition MC’d by Paul PK Kim and judged by a hand selected celebrity judges panel. Did we mention there's a beer garden with craft beers from Beer Belly and Korean wines? The Korean BBQ Cook-Off brings the top Korean BBQ restaurants in Los Angeles to showcase their best BBQ dishes to the public. Admission is free; plates range from $5 to $15 Cash Only. All beers will cost $5. S. Hobart St. between 7th St. and Wilshire Blvd., Koreatown http://kbbqcookoff.com/

Summerlicious Vegan Shindig
1pm - 6pm
Hosted by Southern Fried Vegan, The Other Door Bar is hosting an all-vegan event to benefit the Beagle Freedom Project whose mission is to rescue Beagles used in animal research laboratories & give them a chance at life in a loving home. A small donation of $10 acts as your entrance fee to a patio populated by some the city's best vegan vendors, including Shawn Leo's Southern Fried Food and The Frankenstand. Plates range from $1 to $10. The Other Door Bar, 10437 Burbank Blvd., North Hollywood. http://www.facebook.com/event.php?eid=194301697291195&ref=nf 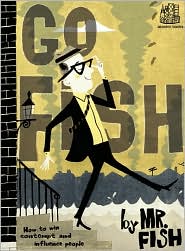 GO FISH by Mr. Fish: Opening Reception
6pm - 9pm
The Robert Berman Gallery is playing host to a wonderful exhibit, a collection of the original drawings and unique multiples of Dwayne Booth aka Mr. Fish - political cartoonist and author of GO FISH (how to win contempt and influence people.) Mr. Fish has been a freelance writer and cartoonist for eighteen years, publishing under both his real name (Dwayne Booth) and the penname of Mr. Fish with many of the nation's most reputable and prestigious magazines, journals, and newspapers. In addition to his weekly cartoon for Harper's and daily contributions to Truthdig, he has also contributed to the Los Angeles Times, the Village Voice, the LA Weekly, the Atlantic, the Huffington Post, The Nation, Vanity Fair, Mother Jones, the Advocate, Z Magazine, the Utne Reader, Slate.com, MSNBC.com, and others. Mr. Fish and Robert Scheer will be in attendance at the opening reception to sign and discuss. Exhibit runs until August 27 at the Robert Berman Gallery in Santa Monica. http://robertbermangallery.com/robertbermangallery/exhibitions.htm

Plate by Plate
6pm to 10pm
Project L.A. is hosting its ninth annual Plate by Plate event this weekend, raising funds for the Asian Youth Center, a local nonprofit. So sad that my bank account can't afford what is always an amazing event, I know I'll be reading about & drooling over the pictures from kevinEats who also did a great write-up on the attendees.  While it's too late for his VIP give-away there are still tickets available. Tickets range from $150 to $250. St. Vibiana's, 214 S. Main St. DTLA www.platebyplate.org

Cemetery Screening: Breakfast At Tiffany’s
7pm start time
Who doesn't love a little Breakfast at Tiffany's? Especially if it comes in the form of delicious fun at the Hollywood Forever Cemetery Screening series. It’s the 50th anniversary of this iconic movie, and here's your chance to see it on the big screen. Tickets: $10. Hollywood Forever Cemetery, 6000 Santa Monica Boulevard. http://www.cinespia.org/calendar/

Night+Market Northern Thai BBQ w/ Domaine LA
starting at 5pm
Chef Kris Yenbamroong will be hosting a delicious BBQ on the back patio of Night+Market with a pop-up wine bar by Domaine LA's Jill Bernheimer and Whitney Adams. Reason? "Just a gathering of friends & an opportunity to cook on an open flame!" Sounds good to me... Plates will be $29 for a variety of Thai sausages + two additional items with glasses of wine priced at $12 a pour. Night + Market, 9041 Sunset Blvd., West Hollywood www.nightmarketla.com

Yarn Bombing
6:30pm
Yep. Yarn Bombing. Thank you google for solving that mystery for me... in what sounds like a ridiculous + totally awesome creative outlet, and in conjunction with the Art in the Streets exhibit at The Geffen Contemporary at MOCA, a collective of yarn bombers will demonstrate their practice on a series of cars in the parking lot adjacent to the museum. 250 South Grand Avenue http://www.moca.org/museum/moca_geffen.php

Once Upon a Canyon Night: Ladies of Laughter
7:30pm
Once Upon a Canyon Night is a presentation of TreePeople and Actors Conservatory Ensemble. In the beautiful S. Mark Taper Foundation Amphitheatre in TreePeople’s Coldwater Canyon Park, which the LA WEEKLY described in their “Best of LA” issue as “surely the cutest outdoor venue in town…with a super friendly vibe, like those small towns you’ve heard of," the collective puts together awesome shows. This week the Ladies of Laughter will take over the venue with special guests Paula Poundstone, Aisha Tyler & music from the hilarious duo Garfunkel & Oates. General Admission: $25. TreePeople Members & seniors: $20. 12601 Mulholland Dr, Beverly Hills http://www.treepeople.org/once-upon-canyon-night
Newer Post Older Post Home