Quickfire Challenge: Create several Birthday Treats out of ingredints in my kitchen... 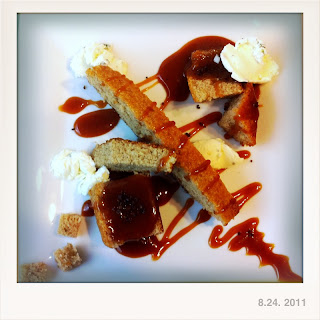 Last week I had a major dilemma... two very special weekday birthdays and no time to shop, prep or cook tasty treats. So what's a girl to do?  Why raid her pantry of course & pull a little bit of magic out of her whisk.

Anticipating having no time on Thursday before my super talented (shh he's a magician!) friend's birthday at the Magic Castle, I headed home after work drinks to see what I could manage with my limited supplies.  Thankfully I always have a full stock of flour/sugar/butter/eggs to get me through any midnight cupcake cravings, and with a heavy heaping spoonful of cinnamon and a few drops of cinnamon roll icing extract I had a tasty cake in half an hour.  But what to do about frosting?  I'm very much a buttercream girl, but I'd just run out of my 99cent store powdered sugar (yes they sell it at the 99cent store!) and was running out of ideas. 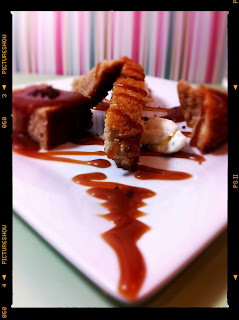 Caramel!  Of course!  Sugar.  Butter.  Cream.  Done.  I let it thicken up & then poured it on top of my cake & finished it off with a little Espresso Salt my mom had found in New York.  Done.  I put it in a little box & stored it in the fridge overnight.

7:15PM.  I just got home, looked at my sad 6x6 box and realized I didn't want to show up at a huge party with such a tiny cake.  It was a much better size for an office birthday (which was good since I was contemplating coming home after the magic castle at 2am and baking her something different), so knowing I had all of the ingredients, I baked 2 dozen mini cupcakes in a record 45 minutes, all while showering, changing, curling my hair & applying make up!  That's a quickfire if there ever was one.  Ok I'm ready for my Top Chef debut!

Cupcakes were a massive success & even lasted until the 5AM munchies hit for my deservedly drunk birthday boy. 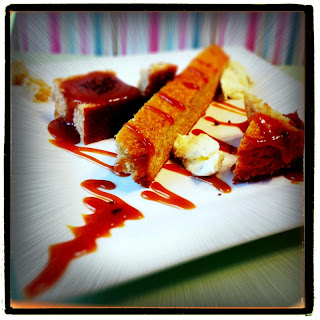 And lucky me, I already had a perfectly sized cake to bring to my girlfriend for her simply sweet birthday, one that she could share, but wouldn't feel guilty if she finished it off herself.

And since cupcakes are so passe now, I cut up some of my cake & arranged it decoratively on a plate with a few scoops of leftover mint ice cream from our last cloak & dinner.  plating for the win!
Newer Post Older Post Home