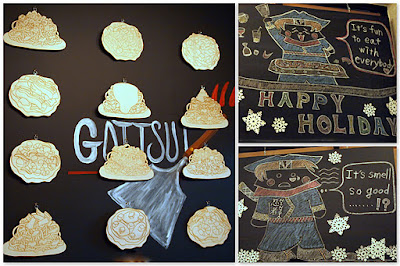 I'm seriously loving having a group of fellow adventurous eaters who gather monthly to check out the new, obscure and {mostly}delicious off the beaten path restaurants all over town. First there were the penis shaped pigs tails.  Then they busted out the live octopus & still moving lobster sashimi.  There was also that super awesome taco truck crawl in Highland Park, and some korean fried chicken at the prince in k-town.  This time, the FOODIE group brings us to little Osaka for a taste of the Japanese Pizza otherwise known as Okonomiyaki. 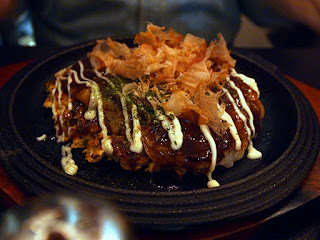 Broken down, "okonomi" literally means "to one's liking" and yaki basically refers to anything grilled, so when presented with the "As you like it Japanese Pancake" offerings, we were giving a variety of choices as to what would go on top.  The base generally consists of a batter mixed with cabbage, fried on a griddle and first topped with a sweet and smokey okonomiyaki sauce, which looks and tastes like a slightly thicker Worcestershire sauce. Then there's a squeeze bottle of Kewpie, (Japanese mayonnaise)shavings of smoked bonito (fish flakes!) and a sprinkle of anori, a dried powdered seaweed. From there you can customize it any way you want! 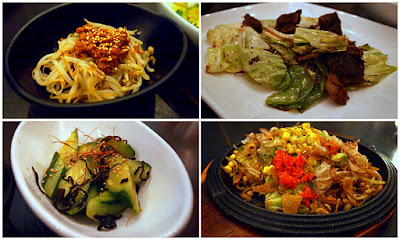 We started our dinner with a smattering of appetizers, from top left going clockwise... Moyashi Nikumiso (bean sprouts with house meat & miso sauce) for which our only complaint was MORE!  Then came the super succulent Sujishio, a Gottsui original.  Seasoned & salted sliced beef atop a bed of grilled cabbage, this was easily the favorite appetizer of the night.  Not to miss out on Gottsui's other specialty, we were treated to a vegetable yakitori with corn, tomatoes & asparagus, and finally finished with a little sweet & sour bite of Ponzu Kyuri.  Similar to sunomono, this dish came with crispy cucumbers marinated in salt & ponzu sauce & topped with pickled seaweed.

Then came the Okonomiyaki.

First off, can we talk about how cute their menu is?  I mean, c'mon.  Adorable.  Kawaii illustrations.  Handwritten ingredient instructions.  The fact that there's a category entitled "Surprise" on their website.  Sold. 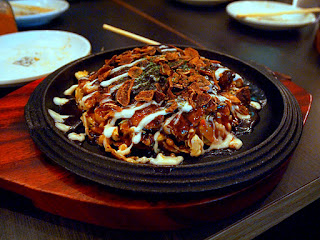 Being a lover of anything covered in garlic, I went with the Angus Beef Okonomiyaki, and after the Sujishio appetizer, I hoped & prayed that my pancake/pizza would be topped with the same amazing short rib.  Yep.  It was.  And it was heavenly.  I opted to skip the Bonito flakes, the fish flavor is just a little overwhelming for me, but I did miss the mysterious "dancing" effect they create atop the dish.  I think my only change on the next visit, is to add a fried egg on top.   That and I definitely want to try the mochi & cheese Okonomiyaki.