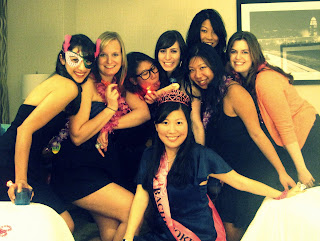 OK I need to make 2 things perfectly clear before I start this post. One. No. I am not engaged. So don't go on and on with your congratulations, and oh that ring is so stunning, and ooo when is the wedding. It's not happening. (And trust me, you will know when it does actually happen.) Two. Yes, the boyfriend was fully aware of our game plan & begrudgingly supported it all in the name of booty.

Now that all of that's out of the way...

One boring night out my friend paused & took stock of her social life.  Every weekend it was the same.  Hit up the same bars, go about casually talking to a few guys, go home. Wash & repeat.  She then thought back to her last few fantastic nights out... all at bachelorette parties.  What made them different?  What made her different at them? 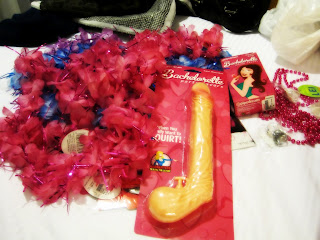 I'd like to think of it as the Halloween Syndrome, put on a costume, a mask of any sorts and it gives you the ability to step outside the confines of your comfort zone thus enabling you to act out your uber confident persona that most people are only privy to after getting to know you for a while. While people love to hate on The Game by Neil Strauss, there's rhyme to his reasoning. People are inherently attracted to confidence.  It's as simple as that.  Girl's at bachelorette parties are confident.  They're also generally intoxicated & to any single guy scouring a bar on a Saturday night, targets.  What does that equal?  The perfect storm.

Now my friend acknowledged that she didn't plan on meeting the love of her life at a bachelorette party (granted she wasn't opposed to meeting him either) but what she did plan on was meeting a flurry of single & cute guys, significantly lowering her bar tabs and having an excuse to walk up to a stranger and feel completely confident in asking him to take off his boxers or give her a lap-dance. So on that one fateful day, the idea of the Fake Bachelorette Party was born.

Rules
Do not talk about the Fake Bachelorette Party.
until the next day of course when you have to explain to people that you're not really engaged.
Commit to your Character.
beyonce, we're talking to you.
Brainstorm a list of "Games" designed to force you to talk to as many guys as possible.
scavenger hunts are a fantastic idea. get the competition flowing.
Pre-Game.
duh.
Choose a location filled with men you'd actually like to take home for a night.
i.e. do not go to Saddle Ranch or Bar 107
Make sure you know important details like Bachelor's Name, Wedding Date, etc.
justin bobby golden.
Go ahead, get yourself a penis gun.
oh and penis flavored lollipops while you're at it. 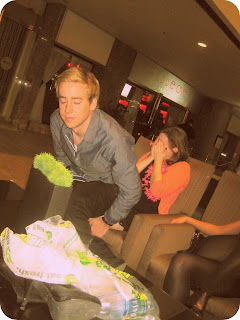 I have to say this was a deliciously wonderful examination of the social psychology of what it takes to change a perfectly normal & centered woman into what HIMYM proudly proclaims the "Wooooo Girl."  (Yeah Slick Mahony, deal with all of those adjectives.)  In our little Machiavellian game, being one of the few girls tasked with playing the bride to be, I opted to draw first shift.  Plus (as you've noticed by now) I'm a huge fan of the "Have you met my friend..." and have no scruples about pulling it as many times as needed throughout the course of a night.
Without going into too many details, I will say this... objectives were achieved, tasks ticked, goals conquered and everyone had a fantastic time.  This was a great little shake-up to our normal routine and do expect to see it pop up from time to time whenever anyone needs a little punch in the gut to their love life. I'll also apologize to those of you who call this little game misleading... actually.  I don't.  It was hilarious and amazing.
Newer Post Older Post Home