After creating a whole line of Fat Washed Whiskey's (Yes you can totally DIY... Watch my video on the process here: http://www.cakeandheels.com/2012/05/who-doesnt-love-bacon-great-bacon.html) I invited my favorite Kevin Smith (sorry Mr. Director Man... you lost that title after making me sit through COP OUT) over to help me concoct some tasty cocktail creations... 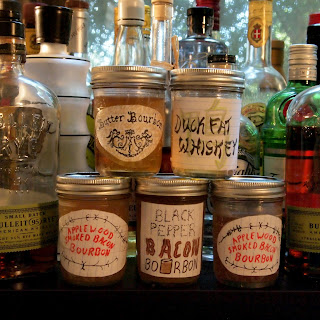 So what kind of Whiskey's did we have to start with? Well first, as you saw in the video, we have a nice & simple Applewood Smoked Bacon Bourbon which has a nice sweet & salty undertone.  This one tasted the most like bacon for sure.  But not wanting to leave it at just one type of bacon, because that would be boring, I also whipped up a Black Pepper Bacon Bourbon infused with both a black pepper encrusted charred piece of pork as well as a handful of peppercorns for an extra kick of spice. This one was perhaps my favorite.  Since I have tons of duck fat lying around (thanks MC Pantry!) I did a nice Duck Fat Whiskey which has a lovely texture and mouth-feel and would go great with Beer Belly's Death by Duck Fries. And lastly I tried a simple Butter Bourbon which came out simply divine... but left me wanting to add a "Browned Butter & Sage Whiskey" to the next batch.

So now that the table was set... the boyfriend's Bar Supplies on hand... an ample bucket of ice chilled... and bowls of sweet citrus ready to go... it was time for some taste testing! 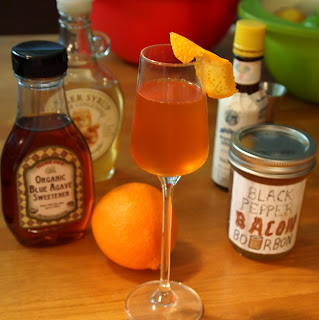 In a shaker over ice chill the black pepper bacon bourbon, orange juice, agave sweetener & ginger syrup. Strain into a chilled glass, top with a dash of angostura bitters and garnish with an orange twist.

After making the first batch & taking pictures, we tried this a second time switching the Ginger Syrup for Domain de Canton which ended up being less sweet.  While the ingredients sound forceful, the end result was actually quite easy on the palate, smokey with a sweet finish. 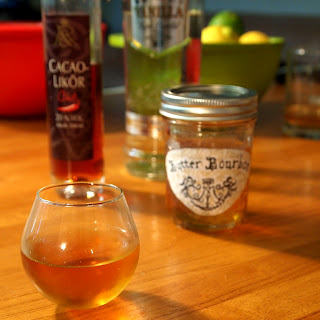 So I picked up this delicious bottle of chocolate liquor in Berlin that tastes like the sinful baby child of Willy Wonka and the Devil.  It's melt in your mouth dark chocolate with a kick of spicy chili at the end that melded perfectly with the warm buttery undertones of the bourbon and the sweet hint of vanilla in the vodka.  Dangerously good, this dessert cocktail could be consumed daily. Another twist that could work well would be the addition of a shot of espresso to make this a complete morning meal. Obviously in lieu of flying to Berlin to track down more of the Cacao Likor, you could substitute any rich chocolate liquor, like Godiva for example.  But... if you do want to fly to Berlin, please bring me back a bottle as well! 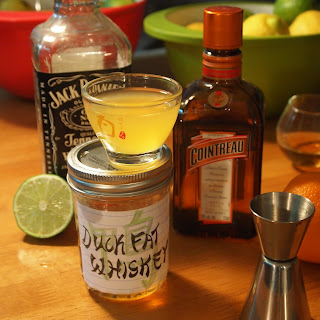 In glass over ice stir the whiskey, oj, lime, cointreau and jack for 3 minutes until properly chilled.  Strain into 2 shot glasses... yep this one's a double!

Since one should never consume copious amounts of duck fat alone, we doubled this recipe to double the fun!  Fatty and rich with a punch to the gut kick of citrus this little cocktail fulfills all your wildest fantasies of passing out wasted in a Chinese Restaurant, only to wake up at 3am with the munchies and the world of food at your feet. Oh right and with Chef Danny Bowien of Mission Chinese Food there to cook it all for you. 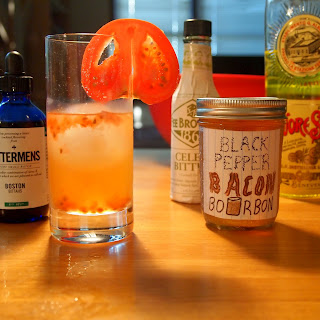 Slice the tomato in half and scoop out the juice and the seeds into a shaker filled with ice. Add the black pepper bacon bourbon and the strega (it's an Italian herbal liquor with the undertones of Saffron) and shake well.  Strain into a glass over ice.  Scoop the remaining seeds on top.  Add the celery bitters and boston bitters at the end.  Garnish with a slice of fresh tomato.

This is for anyone who enjoys the principals of the bloody mary but hates the feeling of drinking tomato soup (yeah that's ME!)  Walking the slightly more savory path on this one we stumbled upon a new cocktail totally fit for a boozy sunday brunch! 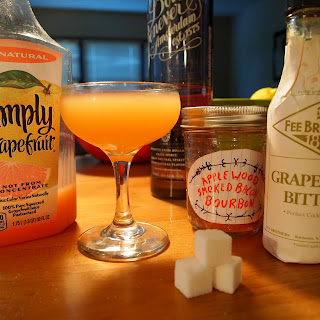 This was our fun take on a Greyhound albeit adding a little Porcine into the mix.  The salty bacon flavor actually pairs really well with the tart Grapefruit flavor, but the sugar cube is really needed to add that touch of sweet that makes this drink sing! 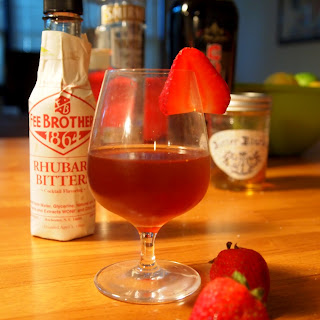 Muddle Strawberry with Zucca Liquor. Add Ice, Butter Bourbon and Vanilla Vodka.  Shake well until chilled.  Strain into a glass and top with Rhubarb Bitters.  Garnish with a slice of Strawberry.

So there's a long story behind this name which of course I can't tell you... that said this is a wonderful combination of Strawberry and Rhubarb (yep that Zucca Liquor is a Rhubarb Liquor!  Oh and my boyfriend's last name... isn't that cool?) in a cocktail that I could easily drink every day.  Easy on the taste-buds without being too sweet, this was one refreshing treat that could be served anywhere and in any climate.  Sunny summer beach day refresher to wintery cold after dinner nightcap.  What more could you want out of a cocktail?