Just in case you missed seeing the Space Shuttle roll by, don't you worry.  There are plenty of other fun and exciting things going on in LA this weekend!  I'm a little bummed about missing the Taste of Abbot Kinney, but that's because I'll be Urban Scavenger Hunting with LivingSocial Adventures and then trying not to die with Epicuryan's challenge of eating everything at the menu on Red Medicine... wish me luck! 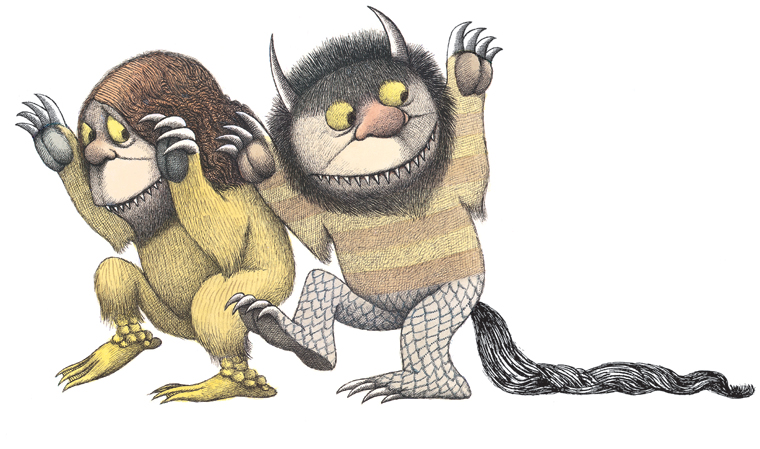 L.A. Antiques, Art, and Design Show
Friday - Sunday
Find inspiration inside an airplane hangar as 60 renowned galleries and designers from around the globe show off their vintage treasures and refurbished finds. Since its inception in 1965, LACMA has been devoted to collecting works of art that span both history and geography-and represent Los Angeles's uniquely diverse population. Today, the museum features particularly strong collections of Asian, Latin American, European, and American art, as well as a contemporary museum on its campus. With this expanded space for contemporary art, innovative collaborations with artists, and an ongoing Transformation project, LACMA is creating a truly modern lens through which to view its rich encyclopedic collection. The Barker Hangar, 3021 Airport Ave., b/t S. Bundy Dr. & Dewey St., Santa Monica. Admission ($20) at the door. http://www.losangelesantiqueshow.com/

Taste of Italy
5pm - 10pm
The annual Taste of Italy is Los Angeles’ premier cultural- gastronomic event. Presented by the Italian American Museum of Los Angeles in collaboration with the Italy America Chamber of Commerce West, Taste of Italy features exceptional Italian and Italian American restaurants, many of which have won Italy’s highest culinary honor, the Marchio Ospitalitá Italiana, as well as dozens of wineries and purveyors of culinary specialties. With each General Admission ticket, guests receive 10 tasting tickets – six for food and four for beverage. Additional taste tickets can be purchased at the event. Each ticket is good for one “taste” or portion of food and beverage. Admission is $50. 424 North Main Street. Los Angeles http://www.italianhall.org/tasteofitaly.html

Halloween-Themed Movie Props Auction
Saturday & Sunday
Premiere Props will be auctioning over 500 costumes and horror-themed props. There will be a preview from 9-11am PT with the live auction beginning at 11am PT. The event will feature items from iconic horror film franchises including "Halloween," "Nightmare on Elm Street," "Scream," and "Saw," as well as items from the upcoming thrillers "Abduction," starring Taylor Lautner and "Straw Dogs." In addition items from Forrest J. Ackerman's personal collection will also be up for bid. Ackerman was the original fan boy and the editor of Famous Monsters of Filmland magazine and is said to have amassed the largest personal collection of science-fiction and fantasy memorabilia. Premiere Props 128 Sierra Street, El Segundo, CA 90245 http://www.premiereprops.com/

Taste of Abbot Kinney
3pm - 6:30pm
The Taste of Abbot Kinney supports Inside Out Community Arts and celebrates some of Venice’s best restaurants. The afternoon event focuses on Abbot Kinney’s culinary talent and features a restaurant walking tour where you can sample signature dishes from your favorite chefs as well as enjoy wine and beer tastings. Highlights also include special presentations and cooking demonstrations during the VIP hour featuring local chefs and VIP reception host Adam Gertler from The Food Network. Plus this is your first chance to check out FEED Body & Soul a brand new shop from Executive Chef Matthew Dickson. He'll be offering attendees a sneak peek of the restaurant and serving acai sorbet at the VIP reception at the event! Boardriders, 585 Venice Boulevard, Venice, CA http://www.insideoutca.org/get-involved/attend-an-event/taste-of-abbot-kinney/

AIDS Walk Los Angeles
8:30am
As much as I love supporting AIDS research, I do wish they didn't make a HUGE loop right around where I live.  In the event that I don't wake up early enough to escape before street closures I'll probably be wandering around this at some point. If you want to, join 30,000 participants who are walking in the largest AIDS fundraising event in California. Proceeds support AIDS Project Los Angeles, which raises money to provide services to thousands of people living with HIV/AIDS. The walk, which begins and ends in West Hollywood, makes a loop around Melrose, Fairfax, Beverly, and San Vicente. http://www.aidswalk.net/losangeles 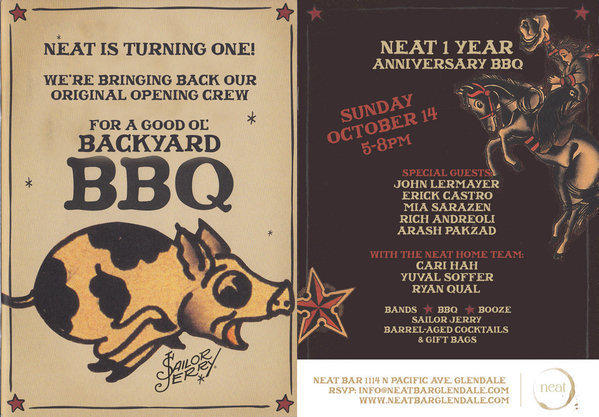 Neat Bar’s 1-Year Anniversary
5pm
Mixology king Aidan Demarest's Glendale hideaway, Neat, turns 1 this Sunday. To celebrate the milestone, Demarest is throwing a birthday bash that day featuring a backyard BBQ, lots of Sailor Jerry barrel-aged cocktails and a stellar lineup of guest bartenders including John Lermayer, Erick Castro, Mia Sarazen, Rich Andreoli and Arash Pakzad. When Demarest opened Neat, his business plan flew in the face of the city's thriving mixology scene. His idea was to serve spirits neat beside a great beer. No frills, no flair, no housemade syrups, fancy garnishes or complicated floats. The time was right and the bar has thrived alongside a still-vibrant craft cocktail scene, proving that it takes all kinds when it comes to booze in L.A. For now, though, he's just happy to make it to the one-year mark and plans to celebrate in grand style. Neat Bar, 1114 N Pacific Avenue, Glendale http://neatbarglendale.com/

Test Kitchen Returns
October 16 - November 11
It's baaaaack!  The popular pop-up restaurant series returns with a vengance at a brand new location in the Arts District downtown.  In the vein of the last iteration of the TK, chefs will be taking over the kitchen at Bestia in the month or so before the restaurant finally opens up.  With the starting crew of Walter Manzke (Republique), Neal Fraser (The Strand House), Bestia’s pastry chef Genevieve Gergis and BLD’s pastry chef Mariah Swan. Julian Cox and Josh Goldman will be doing up the cocktails. If you want to know who else will be there in the coming weeks, sign up for the Test Kitchen newsletter. Bestia, 2121 East 7th Place, Downtown www.testkitchenla.com 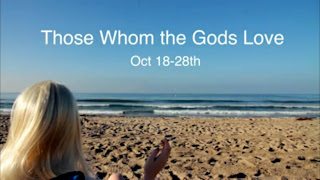 Those Whom The God's Love
October 18th - October 28th
My friend Elise Cantu is starring in a play!!!!  GO SEE IT!  Here are their dets:

We are transforming a warehouse loft into a theatrical space, in which we tell a cautionary tale of the 21st century chockfull of wit. Audience members are to congregate at our lobby & neighboring restaurant, called Eat.Drink.Americano where they can have a delicious dining experience (prix fixe menu dedicated to the show) or glass of wine. Their guide (a KIDS TERRIBLES trademark) will pick them up from the venue 10 minutes before showtime, and escort them to the nearby loft where the story begins. Dining at Americano not required, but don't be late or you'll be left behind!

With an original score fusing old hollywood (Singin' in the Rain) with the new (Nicki Minaj), and an actual apartment space where the audience watches the goings on of the actors whose states of mind unravel during scene transitions, it will surely be a humorous yet maniacal thrill ride in which the audience partakes.

This is the comic tragedy of Sonia, a sheltered astrophysics major at the University of Chicago; she secures an Internet boyfriend, Darren, an aging trust fund baby in Malibu, who flies her out for the weekend to lose her virginity. Lulu, Darren's neighbor and Harvard dropout turned undercover paparazzi - will stop at nothing to win back the love of a Lindsay Lohanesque superstar who sent her on a downward spiral. When Lulu and Darren invite Sonia into their make believe world, where you can't tell the difference between the "Hollywood dream" and reality, Sonia questions her own identity.

After the show, join some of the cast & production members back at Americano - with your ticket stub, there will be drink specials just for our guests! http://www.brownpapertickets.com/event/278734?date=716813