If I weren't working all weekend I'd most certainly be at Elise Cantu's play Those Whom the God's Love!!  But sadly since I am, I won't be doing much of anything aside from sleeping.  So tell me what exciting things you all are up to this weekend instead!

Rocktoberfest at L.A. LIVE
Friday & Saturday
What do you get when you combine KISS front man Gene Simmons with Master Chef Wolfgang Puck and AEG? Rocktoberfest at L.A. LIVE. Nightly festivities will include DJs and live bands, special celebrity guests, beer-friendly cuisine, local, national and international beers, and a special craft beer festival on Sunday, October 21. Nightly festivities are scheduled for Tuesday, October 16 through Saturday, October 20 from 5:00 p.m. to 11:00 p.m. with early bird tickets starting at just $20. Closing out the first annual Rocktoberfest on Sunday, October 21, will be the Craft Brew Festival from 3:30 p.m. to 6:30 p.m. which will feature more than 50 different craft beers and breweries. 800 W. Olympic Blvd, Los Angeles, CA 90015 http://www.rocktoberfest.com/rocktoberfest-l-a-live/

60-cent Burgers at Tops
Friday & Saturday
To celebrate their 60th anniversary, your grandparents are going to have gross old-sex and watch CSI. And while they're doing that, you'll be out at Pasadena landmark Tops celebrating their 60th anniversary Friday and Saturday by having 60-cent burgers w/ onions, tomatoes, lettuce, and pastrami. The Original Tops: 3838 E Colorado; Pasadena http://www.theoriginaltops.com/

Brewery Art Walk Fall 2012
11am - 6pm
Yup, it’s already that time of year again, the second Brewery ArtWalk. Only twice a year does the huge art complex open the doors of all its studios to the public. With over 100 participating resident artists, there will be lots to see (and buy). Make sure to stop by Hollis Bulleit’s studio (yup, THAT Bulleit) where she’ll be selling her pins, jewelry and, yes, her famous headdresses! The Brewery Artist Lofts, 2100 N Main Street, Los Angeles http://breweryartwalk.com/

Egyptian Theatre 90th Anniversary Masquerade Ball
6:30pm
Dance floor and band stage sponsored by the Art Deco Society Los Angeles. Beverages sponsored by Frey Vineyards, Hubert's Lemonade, Hansen's, Chivas Regal, St. George Spirits, The Six Shooter Company, and Anheuser-Busch (Stella Artois, Leffe, and Hoegaarden). The Egyptian Theatre on Hollywood Boulevard has been rolling films on the big screen since 1922 when the movies didn’t yet talk and Howard C. Carter was still hot on the trail of King Tut’s tomb in Egypt. A theater owner named Sid Grauman was tapped by developer Charles E. Toberman to open a grand movie palace on Prospect Avenue (now Hollywood Boulevard) in an area of the city not yet particularly known for night life. The theatre opened to great fanfare on October 18, 1922 with silent film era royalty Mary Pickford, Douglas Fairbanks and Charlie Chaplin in attendance - and the rest is legend. Please join the American Cinematheque in honoring the legacy of the Egyptian Theatre, the home of the first Hollywood movie premiere! http://www.americancinemathequecalendar.com/content/egyptian-theatre-90th-anniversary-masquerade-ball 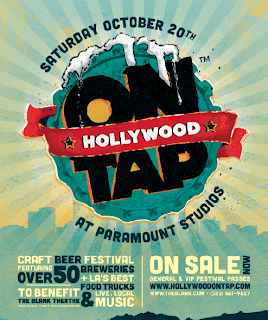 Hollywood on Tap
1 - 5pm
Join us Saturday, October 20, 2012 for Hollywood On Tap, a Craft Beer Festival, held in the heart of Hollywood, California at Paramount Studios on the iconic “Streets of New York” backlot. This afternoon fest will feature local and popular craft brews, live music, and the best food trucks Los Angeles has to offer. With over 100 specialty beers on tap and a variety of ffood trucks like the Green Truck, Coolhaus, India Jones and Trailer Park truck, this is shaping up to be a delightful afternoon in the sun on the iconic New York streets on the backlot at Paramount Studios. Tickets are $50 for VIP and $40 regular admission. Paramount Studios: 5555 Melrose Ave. http://www.hollywoodontap.com/

LA Magazine’s 2012 Food Event
2pm - 5pm
The Food Event 2012 is Los Angeles magazine's seventh annual culinary extravaganza. The day features great chefs, culinary experts, sommeliers, plus unlimited food, wine, and spirits -- all in one place, for one price. Watch celebrity chefs in the demonstration kitchen and epicurean experts participate in panels in the VOSS Conversation Lounge. Restaurants are hand selected by our James Beard award-winning dine editor. The incredible rural setting, Saddlerock Ranch in Malibu, home to Semler and Saddlerock wines, sets this culinary event above others. The ranch boasts acres and acres of natural beauty, vineyards, rolling hills, animals like llamas and zebras, and space to spread out and relax for a true escape from the city, but with just a short drive. So come dressed casual -- comfortable shoes are a must -- and please leave the pets and kids at home. Unfortunately for the little ones, the event is 21+ only. Be sure to purchase tickets early this year. The event is becoming very popular and will sell out! Hope to see you there! $115-$130. Saddlerock Ranch, 31727 Mulholland Highway, Malibu http://www.lamag.com/thefoodevent/