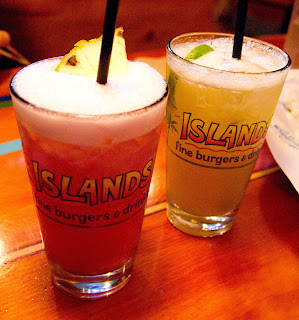 I'm a Hawaiian, medium-rare with grilled onions and a side of cheddar fries.

God I was such a nerd in high school.  I mean, not that I'm not still a nerd, but... I think I've rounded out the rest of my attributes quite nicely.

Everyone has it.  That one place that was the "go-to" spot.  Where you could always count on a reliable meal, reserved tables and a great time. Island's Restaurant was hands down our high school haunt, and all of my friends could be identified by the type of burger they always ordered.  We were creatures of habit, and it was quite easy at a restaurant that offered a variety of fun burgers and the BEST cheddar cheese fries ever.

So when they asked me to come check out their newest burger on the menu, the Nalu Nalu, I couldn't think of something I'd want more!  A burger, fries & cocktails... and a trip down memory lane.  Done. 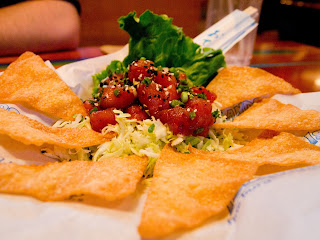 First up on the docket was a newbie to the menu... Ahi Poke?  Well being the "Hawaiian" girl I had to try this little gem.  Tuna marinated in soy sauce, sesame oil & sambal (which we totally looked up and is a spice blend from Indonesia) topped with scallions & sesame seeds.  OK, pretty simple presentation.  The fish was fresh and flavorful, but I do wish there was a little more kick to the seasoning.  If you're a sucker for sesame then this would be right up your alley.

I think the most surprisingly delicious addition to the plate were the homemade won-ton chips.  Very lightly fried and super crispy, I could have easily eaten a basket on their own with a pint of beer. 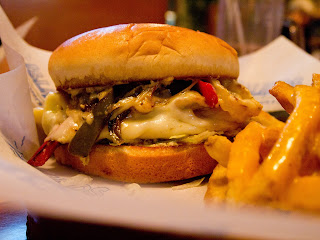 Appetizers aside, it was time for the big burger.  The Nalu Nalu.  Tradition topped with roasted garlic aioli, provolone cheese, sauteed onions, mixed peppers, hot deli pepper rings and lettuce.  Described as the "philly cheese-steak burger" certainly does this justice.

It makes sense.  Smother a good burger on a soft and toasty roll with cheese, peppers and onions?  Who wouldn't want that?

But I think the thing that was the most surprising was how much it actually tasted like a good ole philly cheese-steak.  I think the secret's in the bun.  It has just the right amount of density to soak up all the roasted goodness while still keeping it's texture to hold up to the mountain of meat and cheese. 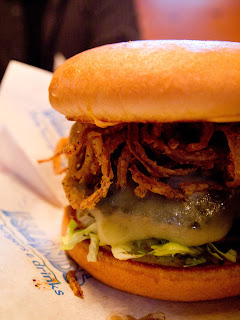 My friend wanted to kick it up a notch, and this being his first time EVER at an Island's, I told him he needed his signature.

Kilauea for the win!  Jalapeno & black pepper crusted burger with pepper jack cheese, chipotle aioli, lettuce, tomato and the very mysterious Island Reds sauce rounded out his sky high burger that almost felt like a food stylist was hard at work in the kitchen prepping this thing.

Oh right and a mountain of onion rings?

I think it's pretty easy to say that anything filled with onion rings will be great.  Especially when they're of the thinly sliced, seasoned and fried variety. 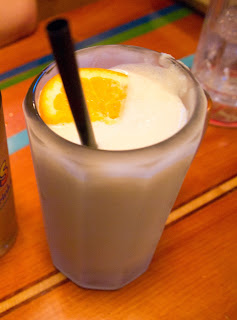 It's nice to see that while the culinary scene in Los Angeles is always in constant fluctuation, one of my staples has remained the same.  They haven't given into trends or fads.  They know what they're doing is producing delicious and quality food and I swear I'd probably kill someone if they ever take those Cheddar Cheese Fries off their menu!